The internet is a large network of computers. Not all computers have the same task. Some are always available and serve information. Others are only temporally available and will access information from others. This model is called the client/server model.

The client/server model is a computing model that acts as a distributed application which partitions tasks or workloads between the providers of a resource or service, called servers, and service requesters, called clients. Source: wikipedia

In the client/server model we have the servers that are always available. They only wait for requests and will never initiate communication. The clients are only temporary active and initiates the communication.

Apache is a server application that speaks and understands the HTTP protocol.

The HTTP protocol is created for Client-Server applications. A protocol is a system of rules that allow two or more entities of a communications system to transmit information. The HTTP protocol is standardized by the IETF - Internet Engineering Task Force - and defines how to request information and respond to that request. HTTP stands for HyperText Transfer Protocol.

The HTTP protocol is a plain text protocol and is thus readable for humans. You can use the developer tools in your browser to inspect the communication between your computer and the server. HTTP makes use of port 80 by default, although it is possible to run HTTP servers on any port number.

HTTP is also a stateless protocol. This means that no information is shared between any request. There are means to retain state between request to make a stateful connection. This makes use of cookies, sessions or tokens.

The request message consists of the following:

The response message consists of the following:

Apache can be configured to host multiple websites. The Host header in the HTTP request will make a distinction between the different websites. This can all be configured with .conf files in the /etc/apache2/sites-available/ directory.

If you use XAMPP on Windows, the default hosting directory is placed under C:/xampp/htdocs.

Apache can be simply installed using the apt package manager. Just run the following command in the terminal:

This should do it. Easy isn't it?

If everything went well, the Raspberry Pi will function as an HTTP server using Apache. The simplest way to to test this is on the Raspberry Pi itself. Just open a browser and surf to http://localhost. You should then get the Apache Debian Default Page. 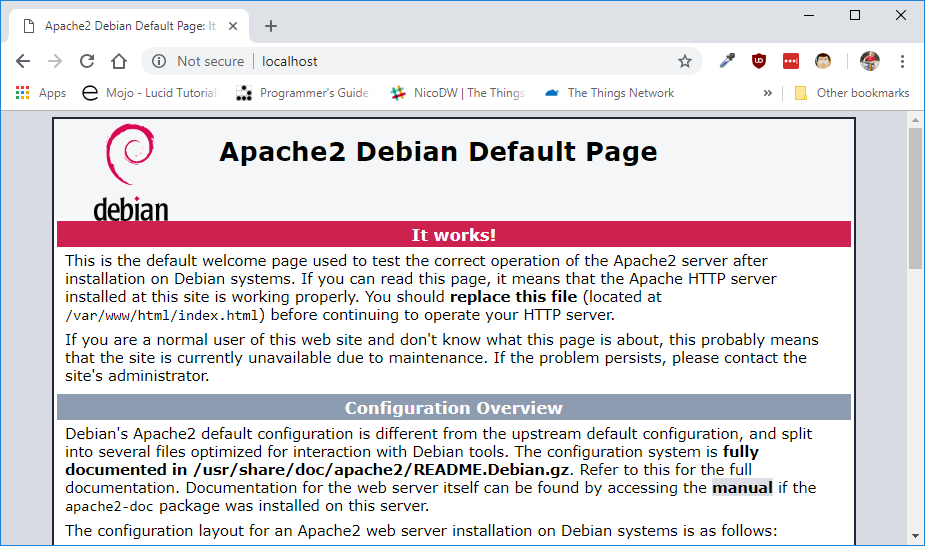 It is also possible to access the webpage from another machine. The only requirement is that the client is in the same network. To do this, you just need the IP address of the Raspberry Pi. To get the IP you could execute the ifconfig command in the terminal. The IP address can then be found in the eth0 interface configuration, next to inet. In the example below, the IP address is 172.16.1.228.