Git was created by Linus Torvalds for development of the Linux kernel aimed towards data integrity and speed. It quickly became popular not in the least because of Github, a web-based Git hosting service.

Get the latest Git release from git-scm.com. Although many Graphical User Interface (GUI) clients for Git exist, this tutorial is going to focus on the command line tool. Mainly because the command line interface is a valuable tool for software development and system administration. 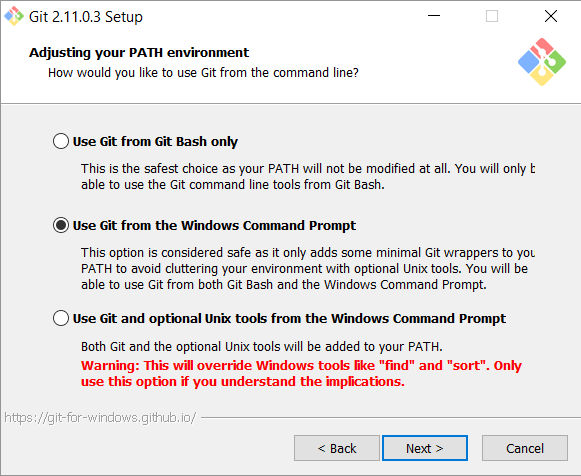 When you type in the command git, the following output is given.

After installation, Git must be configured with a name and e-mail address. This is important because every Git commit is accompanied with this information.

There are two possiblities to start working with a Git repository. In an empty directory either create a new repository

or clone an existing repository

In the directory a hidden .git folder will appear. This .git folder effectively contains the entire repository.
Hint: to start a new repository on Github, make a new project on Github, then clone it locally. The other way around is also possible, but it requires a few more steps.

Two steps are needed to commit a change to a local repository. First, all changes to be committed must be added to the staging area. To add all changes

Then the staging area can be committed to the repository.

The -m flag defines the commit message. Committing without a message is strongly discouraged. Should you forget the message flag, a text processor will be started (default is vim) to write a commit message.

Finally, in order to push the commit to the server.

Notice that the commit number is a random hash. This hash can be used to refer to a specific commit. Most tools support completion of the hash if the first characters are entered.

View all changes between the working directory and latest commit.

Typically a repository only contains source code, documentation and configuration files. Everything that can be generated by a compiler or some other tool should be left out of the repository. In order to prevent files from being committed to a Git repository, add a file named .gitignore. Every pattern added to this file indicates files or directories no longer considered to add or commit to the repository. For example

A branch is a pointer to a specific commit in the repository. Branching creates a new pointer.

The default branch is called master and will typically point at the latest stable release of the project. Note that committing actually moves the current branch to the new commit.
Before branching beware that all uncommitted changes in the working directory will be discarded to switch to another branch. In order to switch to another branch use a checkout. It is also possible to use the hash of a previous commit in order to jump to that commit with a checkout.

An example, in the starting situation there are some previous commits and the latest commit is pointed at with the master branch.

Notice that creating a new branch this way makes the new branch point at the same commit as the master branch.

Committing to the current active branch will advance the pointer further.

To merge the new code in the master branch perform a merge.

Always checkout the branch where you want to merge to. Then execute the merge command. These two commands effectively moves the master branch pointer forward.

If both branches have one or more new commits starting from the common commit, a new commit is added where both are merged to.

Finally, when a branch is no longer needed delete the branch

This was a very basic introduction about the usage of Git. Pro Git by Scott Chacon and Ben Straub is a great free reference for more information.